A few years ago I was really into SUP racing but have steadily lost interest in it.. I m not sure why; but I think I have met a few too many paddlers who compete to be the winner…if they are not the winner they have an excuse…always an excuse…either that or they are a bit too non chalant about paddling it seems to be a side interest…something that they will move on from in the next few years…. as a die hard paddler I m dissappointed… so I limit myself to spending time in that environment and thus I have steadily decreasing mad training sessions and started exploring the coast with SUP. ( also the  fact that I can’t actually be arsed to train…. if there are waves I ll be on a wave with my sup surf…if there is wind and waves I ll be on my surfski…if there is neither I ll be relaxing on the beach….)

This exploration all started in Scotland and since moving to the north coast of finistere I have started branching out, finding islands and stretches of the coast I can only get too by paddling….and having a cup of coffee..I like the idea of peace and quiet…funny how that has just evolved in the last 3.5 years ;)…eventually I ll take my tent…spend the night…

So last night my mate Melina (a canuck and hockey player) came up to join me…a much needed respite from the kids  (I run a respite centre for mums in the summer holidays…paddling and wine drinking is on the syllabus).. with bloody strong westerly winds I was unsure of what to do… but alas I thought lets do an upwind wind\down wind with an apero ( “aperitif  alcoholic drink taken before a meal to stimulate the appetite” )

After a short drive to the neighbouring village; Plouguerneau, and an obligatory drive-by of my hockey hall we set about for a tiny 1km up wind…after a few minutes of zig zagging by Melina we were away….20 mins later we were on the island… some tourists had already pitched camp there…I can only imagine their horror when they thought their island insolite was about to be ruined….lucky for them we were keen to avoid them too…

So after a bit of island exploration we set about to find a place to take our apero and watch the sunset…. looking over to Stagadon and Ile Vierge it was great to breathe without worrying about an elbow in the throat from a child….

I m hoping to go back for an overnight in September when the grockles have left; with the girls….and some refreshments…

So there you have it…a micro adventure of 2.5hours…babysitter was on the clock so no tine for dilly dallying

(We also wanted to reward ourselves by ordering a take away pizza…only to find the pizza placed closed…ah yes we thought its is Thursday and the height of the tourist season….why would they be open???  – bloody french)

Paddle talk…We paddled my 14′ bic tracer and loco amigo 10×32 isup…considering the head wind was 20knots the loco handled it well…extremely stable and cuts through the wind nicely… Melina had the bic and on the way back she really got some speed…the loco surfed the dw waves really nicely too…I am suitably impressed by the amigo i ve surfed it; been on a dw and taken beginners out on it and uts been great and its extra light too 🤗

Nice bit of green on the beach 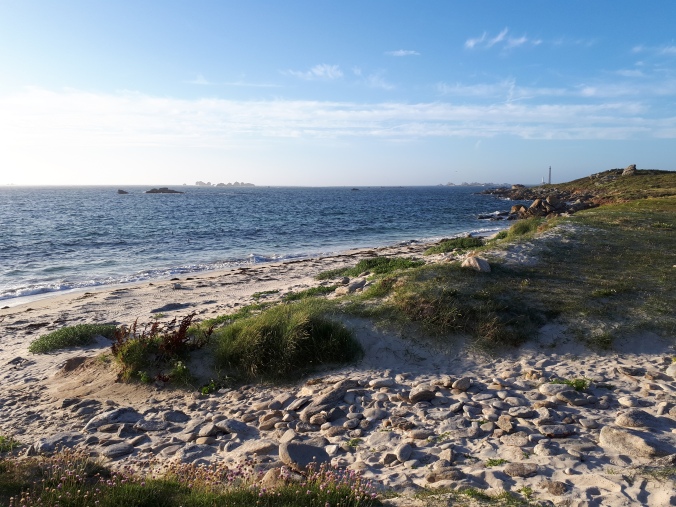 View out to Ile Vierge lighthouse 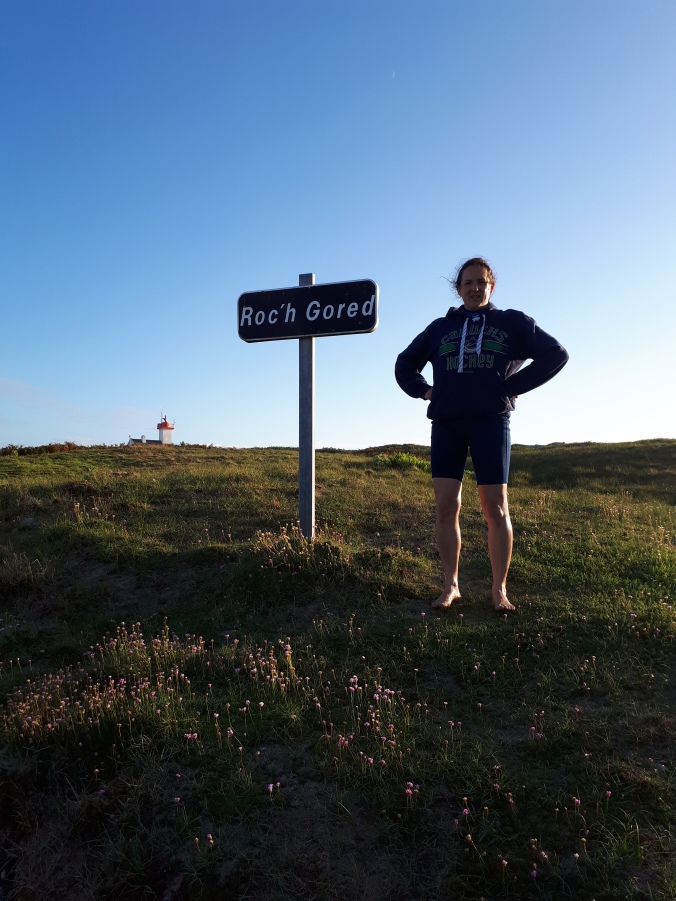